Both pairs of gliders enjoy their time in the tent at night, more on some days than others. M has picked up a few things at garage sales for them to play on in the tent. A favorite is a cloth covered ark that we hang from the roof of the tent. This is a child's toy about 15 inches long and 12 inches high. They can climb on and in it. CB and Foehn prefer to crawl inside the ark and then poke their heads out the windows. CB especially likes the fact he can get into the ark and groom himself without Foehn hassling him. Cirrus and Virga like to climb on the outside of the ark but rarely crawl inside. 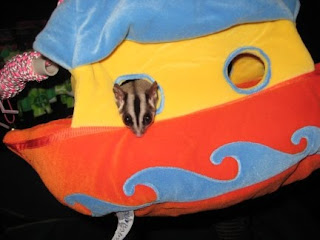 Foehn looks out from the inside of the ark

Cirrus has become the more active one when the ladies are in the tent. She loves to run around the tent, climb up the sides, jump on to my shoulder, and then run down again. One of her favorite things to do is run along the floor on the side of the tent, then stop about every foot or two and get up on her rear legs to look out.  I'm not sure what she is looking for, but it is fun to watch her curiosity at work. 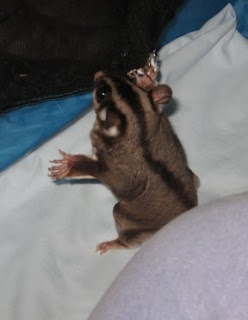 Cirrus checks out the action on the other side of the screen
Posted by Berg at 9:40 PM No comments:

The Weather Thing Only Goes So Far

This was a stormy week, with thunderstorms just about every day. They were particularly strong on Tuesday afternoon. Apparently giving the gliders weather related names doesn't mean they are fond of all the noise that accompanies thunderstorms around here.  On Tuesday afternoon Virga and Cirrus did not like having their sleep disturbed by the thunder and began crabbing in their pouch. That's the first time any of them have been bothered by the thunder, but these storms may have been the worst we have experienced this year.

Over the last two weeks we have seen some big changes in Cirrus' and Virga's behavior.  M has been able to pet both of them in the pouch without them crabbing. It wasn't two weeks ago when they would crab (and occasionally bite) if you bothered them while they were sleeping. They also have been more comfortable with me in the tent. Cirrus, in particular, has taken to grooming me each time. She will sit and lick my arm or my hand for a minute or two at a time. Virga has joined her a time or two, however she tends to let her teeth get into it a little more than I prefer. They really seemed to have changed their "attitude" in the last two weeks, and we think it may be to the point where we can try introductions to CB and Foehn again.
Posted by Berg at 9:04 PM 1 comment:

I just finished some time in the tent with Virga and Cirrus, and the "kids" are still sleeping.  Since they were in for the day by the time I came in at 6:15 this morning and only up for a brief time this afternoon for their snack, they have been sleeping for, oh, about 15 hours. Not only have they been turning in earlier because of the early sunrise, but they seem to have been sleeping longer as well.

Bonding has been progressing well with Virga and Cirrus. They have no qualms about climbing on us or jumping onto my arm or shoulders in the tent. They had a good time this afternoon climbing on M and exploring.  They both are starting to enjoy (or getting used to) being petted. The only time they seem to be holding back is when they are in their pouches (either sleeping or bonding). Virga, in particular, seems to have the biggest issues. Tonight they ended up in separate pouches after their afternoon snack, M took Cirrus, and I had Virga. M had her hand in the pouch with Cirrus who had no complaints.  I had Virga in her pouch on my lap and she started crabbing over the slightest disturbance. I opened the pouch to check on her and she turned up the volume while also assuming the "ninja" pose. So,  left her alone and she eventually calmed down. What's interesting is that she has no problems when we are in the tent or when we are feeding her snacks. There is no crabbing, no biting, no running away, and in fact she is rather laid back. It seems be only when she is in either the sleeping or bonding pouch. This is giving me some misgivings about the success of eventual introductions to CB & Foehn. While they may get along fine when they are out and about. I am worried that when it comes to potential pouch sharing that there could be issues. It's possible that each pair will sleep in separate pouches by choice which is no problem. We just have to be sure there are going to be no territorial squabbles

Well, CB and Foehn are now up and around, and the ladies have turned in for a nap after eating a little of their dinner. Time for me to turn in as well.
Posted by Berg at 12:10 AM No comments: