We have continued the process of familiarizing the CB and Foehn with Rossby and Sprite. So far we have been switching cages (and pouches) every other day. Last weekend I moved the small cage about 5 inches closer to the large cage. This week we will start switching cages every night. That will be sort of a pain, only because the pouches stay with the cage, not with the gliders. So, each night I'll have to do the glider shuffle, placing CB and Foehn in a separate zipped up pouch while I get the other two up and out for their mealworms. Once that's done, I put that pouch back in the cage and turn CB and Foehn out.

Normally CB and Foehn are sleeping when I bring Rossby and Sprite back. They head for their kitchen right away for some dinner. In the few times both pairs have been out and about in their respective cages, there seems to be a lot of checking each other out but not much more than that. Nobody seems to be freaking out. So, assuming the familiarization process continues smoothly we may be able to try introductions again soon.

An update on the false alarm on CB the other night. The next day M had Rossby and Sprite in the room for yogurt and Rossby disappeared. She could not find him anywhere. That is, until she heard some rustling and scratching over by the computer desk.  M went over to look for the noise and found it was coming from the printer tray on one of our printers. It turns out Rossby had found a nice little spot to hide. She pulled out the tray and there he was, a little scared because of the noise and sudden movement of the tray. From the looks of the chewed paper it appeared that CB had also found this spot. It was sort of confirmed when CB headed that way the next time he was in the room
Posted by Berg at 11:12 PM No comments:

Last night we had CB and Foehn in for playtime. As has been the case lately, they spent most of their time in the pouch, finally emerging and hour or so after we brought them in the office and gave them mealworms. Last night they emerged about 10:30 or so and spent some time running around. Things got quiet after awhile and I figured it was time to get them back to the cage and bring Rossby and Sprite in. Foehn was settled into a plastic container that they like to climb in and out of. Normally CB is in there with her, but not this time. I looked around for him a bit, then decided to put Foehn in the cage and come back to fetch CB.

Usually CB will come out when I shake the pouch (the zipper rattles), but last night there was no response. I got the flashlight and thoroughly checked out the room, looking behind, in, and underneath anything he could climb into. No CB. I looked everywhere one more time and he was nowhere to be found.  The only time he could have escaped is when M cracked open  the door to let me know their food was in the cage. They are fast and on more than one occasion have gotten by us without being noticed. I went and told M (she was just getting ready to turn in), and she came out to help with the search. Unfortunately doors were open to all rooms, including our outdoor screen room.

With flashlights in hand we checked his usual haunts and neither saw or heard him. M checked the office again. We decided to lay out pouches in each room hoping he would climb in if he came across it. We set a live trap in the basement with food on the chance he went down there (he would not be able to climb up the stairs). I told M to go to bed. I still had to take Rossby and Sprite out and give them their mealworms and some play time.I figured I would stay up as long as possible and make "rounds" of the rooms periodically to see if CB had found one of the pouches. He would be easier to find once he was up and active as opposed to sleeping in some corner.

M went out to the screen room one last time to look around and I fetched Rossby and Sprite. They jumped to their tree once we were in the office and I started to give them their mealworms. There was a scratching sound over by the computer, but since Sprite likes to take a few runs around the room before her mealworms I didn't think much of it until I noticed they were both on the tree.  There was movement underneath a pouch I had dropped there to the right of the computer, and a moment later there was CB! I gave Rossby and Sprite each a mealworm to keep them occupied, then gathered up CB and took him to the cage.

We don't know where he was hiding for sure, but M thinks he may have crawled into a pencil cup on the computer table which neither of us bothered to check. We were just glad he wasn't running around the house. It could have been a very,very long night.
Posted by Berg at 11:52 PM No comments:

The Road to Introductions Has a Few Bumps

We started the process to introduce Rossby and Sprite to CB and Foehn again. The first stage in that process was to move their cages within about 18 inches of each other. We did that about a week ago and so far so good. They have been out on the sides of the cage checking each other out.  It has been uneventful and none of them seem to be stressing out over it.

Today we began phase 2. Both pairs got clean pouches, but we mixed the fleece blankets each of them have been sleeping with together. They both have some of their own and some of the other pair.  None of them were too sure about this at first. Since I was cleaning cages today we hung CB and Foehn's pouch in our bathroom while the cage was being cleaned. They weren't quite settled in when I shut the door. When M went back in later they were both asleep in M's sweatshirt, which was sitting on the bathtub, instead of the pouch.  On the other side of the house, Rossby and Sprite settled in pretty well to their pouch. The different-smelling blankets didn't seem to make much difference to them

When the cages were clean and back together I lifted Foehn and CB out of the comfortable nest in M's sweatshirt, placed them in the pouch and hung it in the cage. Foehn and CB came out of the pouch, but it wasn't long before CB was back in and sleeping.  Not Foehn. She seemed to be stressed and did not want to go into that pouch. She ran and the wheel and climbed all over the cage. We figured she would eventually settle down with CB.

When I checked on her some time later I found her curled up asleep in a small watering can toy in their cage. No blankets, no CB - just Foehn looking rather tired and forlorn. 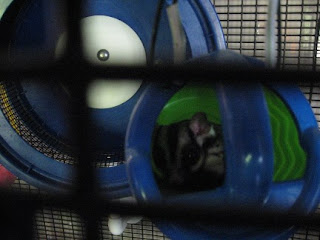 M took the toy with Foehn out of the cage, and Foehn climbed out. We put her back in the cage and she ran around a bit, ran on the wheel, and finally decided to join CB, who now had poked his head out of the pouch to see what was going on. They have been asleep since, except to have their mealworms. M noticed that Foehn had arranged all of Rossby and Sprite's blankets on one side of the pouch.
Posted by Berg at 10:29 PM No comments: