Well, as Berg said, taking the gliders on an overnight is as bad as packing up for a trip with a baby. The first night, it was much like sleeping with a new baby, too, keeping your ears cocked for that sound of trouble.  They started playing on the wheel and walking around the tent as usual. Then Berg fell asleep, and began to snore. All playing stopped. The silence was deafening! You could almost hear them saying," who or what is THAT?" it lasted about 5 minutes, and then the play began again!
On the second night, both of us fell asleep quite quickly. Early in the morning, Foehn began barking loudly. I looked at the clock next to our bed and thought it said 4:45am, so I decided to ignore it. But, it seemed to get desperate, so I checked my cell clock and noted it was 6:45am. When I went to the tent and unzipped it, Foehn jumped to my hand and continued to bark desperately. I looked around for CB, but couldn't  see him. Foehn began to jump from my arm to the back of the travel cage, then back to my arm, all the while barking. S woke up and I told him she was ready for her licky treat, but he informed me they had gotten one at 6:00. We could not figure out what was causing her to bark and run back and forth the the back of the travel cage. When I moved the travel cage, a very groggy CB climbed to the top of the travel cage. We had put their sleeping pouches on top of the travel cage because S felt the room was very cold and didn't want them to sleep on the floor. We waited figuring they would both be going into the pouch, but, CB just froze on top of the cage and Foehn continued her barking and running back and forth. She never tried to get out of the tent, or climb up my arm, just ran back and forth barking the whole time.
It finally dawned on me to put their pouches on the floor of the tent, and, sure enough, as soon as I did that, the barking stopped and two very sleepy little gliders crawled into their pouch and fell fast asleep! We could not believe she was actually trying to communicate something to us like that! It was like Lassie, trying to drag Timmy by his arm to show him a problem. We were very surprised by this new sign of trust and bonding...
I might add that by the time we left, my sister and her SO were quite smitten with the "kids".
Posted by Berg at 10:22 PM No comments:

This past weekend we visited M's sister who lives about 3 hours from here. They had not yet seen Foehn and CB so were anxious for us to bring the gliders with us. This would be the first long trip with them since we brought them home. The travel part was easy - it occurred during their sleep time and they slept the entire trip. The paraphernalia we had to bring along was a whole other story. We brought the tent which we planned to let them play in all night, the travel cage, pouches, food, water, their wheel, various fleece blankets, the tent tree and other stuff. The tent was set up in the guest room where we slept, or rather, where we tried to sleep. Actually, we could sleep, but there were noises much of the night - climbing, the wheel, and including a few periods of barking. When all was said and done, overall, it worked out pretty well. They seemed to be a little discombobulated since they were out of their normal routine, but once they were back to familiar surroundings they were back to normal.  There were some interesting things that happened while in their "road quarters" which I'll let M write about when she has a chance.
Posted by Berg at 11:24 PM No comments:

Sugar gliders are called that because they glide and they feed on sap and nectar. In order to glide they need some space where they have time to extend their patagium and "catch some air".  There is really not enough space in a cage for that, even a big one, and  the tent doesn't quite give them the height and distance either. M has been letting them out of the cage in my office in the late afternoon and one of the things they like to do is climb up the outside of the cage (it's 5 feet high). Last week Foehn and CB started gliding from the cage to M standing about 4 feet away.  It was a large distance, but it was enough for them to try and glide. You can see them extending their forearms and legs to glide, but it happens pretty quick.  I tried to get some video of them gliding to her, but of course when you want them to they never do. Here is a neat video showing gliders gliding in slow motion.  At some point we hope we will have some space where they can really "spread their wings".
Posted by Berg at 11:19 PM No comments:

Foehn and CB will be nine months old in two weeks. I don't quite know what that is in "glider years", but I think they are well into adolescence. At least their behavior seems that way  from a human viewpoint. CB reminds me of a teenage boy during our time in the tent. First, he is hard to "get out of bed"...he is slow to get started playing and would rather sleep. He has taken to regularly crawling into my shirt and curling up for a nap after coming out of their pouch. After 10 or 15 minutes I'll scoop him out. When he is finally up and around, he then spends time within my crossed legs grooming himself, seemingly forever. I've told M that we should get him a mirror because he reminds me of a teenager getting his hair just right. Even Foehn thinks he is at it too long. She will come down from her climbing and jumping to see what he is up to, and may even try to help him out. That will typically set off a little "wrestling" match, with both holding on or batting at each other and "tssting" (sort of like an abbreviated hiss). If they go at it a little too long I break it up, but usually that's not needed. 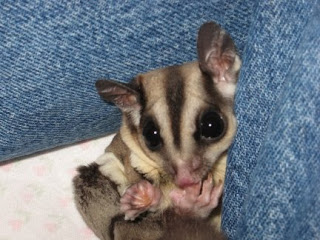 CB sitting against my leg making sure he is "just right". Gliders groom themselves mostly using their rear feet.

Over the last two weeks we have seen more signs their trust in us is solidifying.  When M has them out in the afternoon they tend to stay on or by her. When I have them in the tent they are constantly climbing up my arm, jumping on to and off my shoulder, and in general spending a lot of time on me. Even Foehn, whose favorite thing is to climb back and forth along the top of tent, now frequently departs from her routine to jump on my shoulder, crawl around from one side to the other, and occasionally nip my ear. The other night I experienced a first when not only did CB curl up in my shirt for a nap, but Foehn climbed into my shirt pocket for a nap herself at the same time.
Posted by Berg at 11:34 PM No comments: