The Bear, the Pig, and the Tiger

Gliders are nocturnal animals, and without actually staying up all night of video recording them you really don't know what they are up to.  We know they eat, because their food is gone in the morning, and we know they sleep a lot even at night. They also play, and recent mornings has left evidence of their nighttime activities. Almost every morning for the last couple of weeks we have found this on the floor in front of the cage: 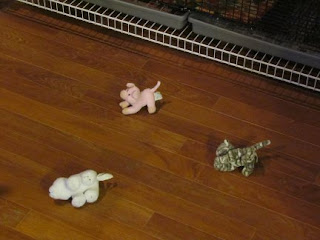 It's a bear, a pig, and a tiger. These are three small stuffed animals that we have on the top of the cage. Occasionally we have found the bear on the floor, but in the last week or two all three have been on the floor in the morning. And, I think it's becoming a game with them. We place the animals on top of the cage, and during the night they manage to work them across the top until they fall onto the floor - every morning. Early this year Cirrus and Virga managed to work a plastic bowl of toys across the top and onto the floor. We're not sure if it's just one or all of them working on this, but someone is having a good time at night. The next thing is to get the video camera set up again to catch them in the act.

Since the weather has turned colder M has been wearing a sweatshirt jacket during playtime in the office. Unfortunately, that  happens to be a very nice warm place for the gliders to curl up in, and it has meant a decrease in their activity.  All four of them are usually pretty lively when the mealworms are being handed out. Once that's over, however, CB, for one, usually makes his way over to M and climbs in her sweatshirt.  Foehn often decides to join him, and occasionally Cirrus. Virga usually spends her time in the wheel, stopping once in a while and climbing up M's leg to check on what the others are up to. In the meantime, I'm sitting here twiddling my thumbs in the dark until M has to leave to put their food in the cage. Then I scoop them out of her sweatshirt and once out they will usually run and climb for a time. I can usually tell when they are ready to go back in the cage as they start slowing down.  I take one of their bonding pouched and shake it so the zipper rattles, then drop it to the floor.  Four gliders scurry from wherever they have been at and climb into the pouch, waiting for me to take them back to the cage and to dinner.
Posted by Berg at 11:05 PM No comments:

You Can Never Have Too Many Blankets

Foehn has long been the "Susie homemaker" of the group. She has been the one to enforce pouch cleanliness (or take issue with those that don't share her view), and of the three females she has been the one to exhibit nesting behavior consistently. One of the things that always cracks us up is when she pulls the fleece blankets into the pouch so she can make things comfy for all of them. You just see the blankets disappear as they are  pulled into the pouch. Last night Foehn, CB, and Cirrus remained in the pouch for much of play time. I had set the pouch down on a chair and watched as she came out and pulled a small blanket into the pouch. I called M to come and watch  (they have a lot of blankets now that the weather is getting colder). She dropped blankets one by one at the opening of the pouch, and one by one Foehn came and pulled them inside. I had the camera ready this time and took video of Foehn's efforts.

The last few weeks have been pretty busy and I haven't much time (nor inclination) to blog. While nothing really significant has happened with the gliders, there have been a few interesting things to note.

First there was what I call "The Week of Consternation". One of the gliders was in heat (I forget who) and there was no lack of "tsk" ing and hissing in the pouch over the course of three or four days. There was even a minor ball-up or two during play time that had us a little concerned. However, once the hormones subsided things turned to normal.

As fall progressed all the gliders were gradually losing weight, with Virga going from around 103 grams this summer to 92 grams in early October. None of them seemed to lack any energy and were in good health. Interestingly, for the last ten days they have completely cleaned their dishes overnight and are eating well. There was no weighing the last two weekends because we were gone. They traveled with us both weekends and did very well. They were, however, very glad to be home Sunday night and able to run around the office instead of in the travel cage.

With the sun not rising until after 7:00 a.m. the last few weeks (until this past Sunday), the gang has been very active in the mornings, especially those that are cloudy and even more dark. M said they were running, climbing, and jumping all over the place once they were in the office. One morning a week or so ago when it was raining I came in to get my stuff for work and was greeted by gliders climbing up my leg, not the usual. Since we have gone off Daylight Saving Time the sun is up earlier and they are a little more settled in by the time we get up to give them their morning yogurt.

Well, they are getting hungry and it's time to get them back to the cage. I'm on yogurt duty in the morning so it's time for me to turn in as well.
Posted by Berg at 11:23 PM No comments: