OK, this escape wasn't a great one with respect to some of the others we have experienced, but at time it happened last night The Great Escape (the movie) was showing on TCM.

The little ones were not being cooperative at the conclusion of play time last night. When it was time to call it quits, I rattled the zipper on the pouch and dropped it on the floor.  On most nights, at least two, if not all of the gliders come from all directions and crawl into the pouch. Last night Virga was the only one that entered the pouch, but after a few seconds crawled back out when nobody joined her.  On night when I don't get their total cooperation, I will usually take the two or three that climb in the pouch and take then to the cage. I eventually got CB and Virga to climb in the pouch, and took them to the cage.  I then came back and fetched Cirrus, who typically likes to curl up in a corner when she has had enough play time. After I placed her in the cage, I came back into the office to look for Foehn. Sometimes they do like to hide out and run around if they aren't ready to quit, so I wasn't too worried. However, after ten minutes looking in every possible place she could be I was becoming concerned. I suspected she may have slipped out of the office when I left to put CB and Virga in the cage. I always try to be careful about this and never have had a problem with one of them sneaking out in the past. Closing the office door behind me just in case she was still in there, I started looking for her in the great room, where their cage is located. Out of the corner of my eye I saw her dash under a bookcase just outside the office.  At least she wasn't downstairs in the basement!  Of course, when I looked under the bookcase she wasn't there. Within seconds I heard the rapid "ptap ptap ptap" of a glider running in the dining room. She saw me - I saw her and placed the pouch on the floor. Thankfully, she crawled right in the pouch and that was that. Elapsed time was about 10 minutes - nothing like her last escape.
Posted by Berg at 11:09 PM No comments:

A Visit from Molly

Today our son E came over for Mother's Day dinner and brought his glider Molly.  Molly is about the same age as Foehn and CB, but he has had Molly since she was about 8 weeks old (Foehn and CB were 5 months old when we picked them up).  Molly has developed a close bond with him, and sticks close to him when she is scared or unsure. Today he wanted to take her outside for a bit and let her climb in a crab apple tree just outside our front door. Now, this is something that we are not comfortable doing with our gliders. We would be afraid they would take off and go exploring.  Molly does not go far and will come back to E. He puts her down in the grass and steps backward, and she chases him and climbs up his leg when she catches him (or rather, when he lets her catch him). During the brief outdoor session today I was able to get a  good photo of Molly in the tree. 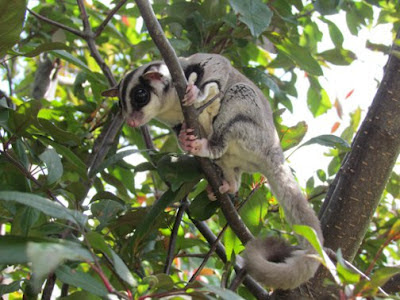 The last few days have been warm and so we have had the windows open in the office during the gliders' playtime. Tonight Cirrus spent over an hour on the window chasing moths on the other side. One particularly large moth kept her entertained (and probably a little frustrated) for almost 30 minutes. The moth fluttered between the window and the screen with Cirrus chasing it every time it came close to the screen. Sugar gliders are insectivores (actually, omnivores) so I'm sure she would have enjoyed catching and eating it. Someday we may have to try and let a couple of moths loose in their cage.