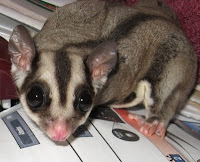 It's hard describe Foehn's personality, and one reason it has taken me so long to write this last "personality profile".

When we picked up Foehn and CB, Foehn sat in the pouch and crabbed and lunged at the sides of the pouch most of the way home, while CB snoozed away the whole trip. She was obviously scared,  Foehn has always been a little skittish, and we're pretty sure part of that has to do with their living conditions at the breeder's. If she wants to climb on you or be handled it's on her terms, not yours.  Yet, she readily bonded with Virga and Cirrus. Of course, she and CB get along very well.

Foehn is the "housekeeper". Sugar gliders don't normally relieve themselves where they sleep (i.e. their pouch).  When we first got Foehn and CB, CB would occasionally relieve himself in the pouch in the morning, mostly because they were still a little scared and uncertain and didn't want to leave the security of the pouch. Boy, would Foehn get on his case about that, hissing and "tsking" at him.  Virga and Cirrus also had the same problem the first month or two they were here, mostly because they were in an unfamiliar place, scared, and didn't want to leave the pouch.  When all four of them finally got together as a colony, Foehn was none to happy with a messy pouch. Fortunately, everyone got along well and Virga's and Cirrus' stress levels went down. So did Foehn's.

Foehn likes the security of her pouch. During play time she is content to sit at the opening of the pouch watching me or letting me pet her. If and when she's had enough petting she will give me a gentle bite on the finger to let me know. Foehn is very gentle and careful taking treats from our hand - she's almost dainty about it. She doesn't particularly like to be held, although once in a great while she will sleep in my hand. Sometimes, when she does come out with the others she will run to a dark corner and groom herself and stays out of the action.  Yet, when she does decide to join the the others running around she has no qualms about jumping on us and climbing up to our shoulder.

All four of our gliders have distinctly different personalities, and if we could not tell them apart by their physical appearance we certainly can by their behavior and personalities. Thar part of what makes them so interesting, and loveable.
Posted by Berg at 11:42 PM No comments:

The gliders have continued to be rather active during "office" time, which has made it a lot more fun for me. I think part of their activity is because they were sleeping through the day without their afternoon snack. They were rested, more more importantly, they knew that they were getting mealworms once they were out and around. That always gets their attention!

One of their discoveries this week was the screens on the office window. Periodically one of them, usually CB,  has crawled up and down the screen n the past. CB likes to climb to the top and then (sometimes) jump off to me. This week, however, they were all on it at the same time climbing up to the top, then down to the bottom, and then back to the top. Part of the attractive might be that the window was open and a breeze was blowing.They had a pretty good time on it for awhile. Unfortunately, Foehn, in one of her more neurotic moments, managed to chew a hole in the nylon screen. The last thing we want is for one of them to open it up some more and decide to go on an adventure, so we'll need to keep that window closed when they are in here until I can fix or replace the screen.


Today was the warmest day of the spring so far (89°F) and humid, too. Tonight Virga was the first one on the screen. Several times I saw her stretched out, her legs and patagium extended, apparently enjoying the nice breeze the was coming in the window!
Posted by Berg at 11:23 PM No comments:

The last several nights with the gliders during office playtime have been very low key. OK, almost boring. Tonight, however, was a refreshing change.  All the gliders have been having a great time running and climbing tonight, even Foehn.  Lately she has spent much of playtime in a corner grooming herself, or crawling into a blanket and resting. As I write this three gliders are in the wheel, and one is on my knee - can't tell who it is at the moment - getting ready to jump off to the tree. I can't quite explain all of energy and activity tonight, but they have been going full tilt for over an hour now. This week they have not been getting their afternoon snack because M has been occupied with our 1 1/2 year old grandson who is visiting and she hasn't had the time. So, they have been getting long days of uninterrupted sleep. That's been the case for the past four days, but this is the first night where they have been this playful. In fact, it has been a long time since they have all been this way.  I wish I knew why, but for now I'm just going to enjoy it.
Posted by Berg at 11:13 PM No comments: