A Short Trip to G-town

While I was out of town on an overnight trip this week, M was on a little trip of her own - a guilt trip.  I did not get home until late Monday night, so M supervised the gliders' playtime.  Last night, however, she was pretty tired and decided to skip taking them into the office. Around 9:30 p.m. or so Virga climbed out of their sleeping pouch and was getting some exercise on the wheel. She heard M walk by the cage, and crawled back into the pouch. A few minutes later, Virga was back out on the wheel. When she heard M walking through the room, she ran back into the pouch. After this happened again a third time, M realized what was going on. When Virga heard her walking by the cage, she thought M was coming to take them out  for playtime and went back to the pouch for the normal trip to the office. M felt guilty, but the gliders did fine and they were very glad to have their playtime tonight
Posted by Berg at 11:14 PM No comments:

The full moon, this year the so-called "super full moon", occurred yesterday. There have been lots of observations and speculation on possible effects of the full moon on animal behavior. Yesterday morning I was up early to make my daily weather observation, and as it turns out, an animal behavior observation as well. Since I was up I let M sleep in and gave the gliders their morning yogurt. I brought them into the office in their pouch, and true to form Virga and Cirrus were first out to get their licks. A few minutes later I decided to fish Foehn and CB out of the pouch since they were fussing. Within a minute or so both Foehn and CB were running around the office like kids on a sugar rush! Foehn continually ran around the room, jumping from me to their tree to the floor and back again. Even when she landed on my leg she hardly broke stride. The two of them continued on like this for at least 10 minutes. Meanwhile, Virga and Cirrus were having a good time in the wheel.  I have never seen Foehn and CB this "hyper" before. All four them wound down after about 20 minutes or so, and one by one they climbed back into their sleeping pouch that was sitting on a chair next to me. Even after I got them back to the cage, two of them were out again in the cage, one on the wheel. It was a while before they all settled down to sleep for the day, well past their normal "bedtime". At the time I was at a loss to explain the unusual morning behavior. It was only later that I realized there was a full moon, and that perhaps the morning activity was a case of "full moon fever".
Posted by Berg at 10:54 PM No comments:

A Year with the Ladies

One year ago today we brought Virga and Cirrus home with us. They had spent their first seven years with another family, and when the family could no longer give them the attention they needed they decided it would be best to rehome the gliders. We were fortunate to be the ones to adopt them.

It took four months before we were able to successfully introduce them to Foehn and CB, but it was worth the work and wait. All four gliders have been living together since then, and other than a few spats from time to time get along well. The "merger" was good for all four, but I think Virga and Cirrus benefited the most. They became more relaxed and definitely more sociable with us. They are two pretty happy gliders.

A Creature of Habit 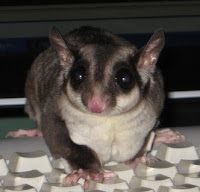 Virga and Cirrus were rehomed with us after seven years with another family. The "ladies" as we call them, are sisters. We didn't quite know what to expect with them. They had come from a home that had over time acquired four cats, so they were pretty wary and skittish. Virga,  the largest of the two gliders, seemed to be the more scared of things than Cirrus. She would crab the loudest and assume a defensive position at times in their pouch. She would crab at the slightest noise, and we wondered if and when she would come around.

It is just about a year since they joined us, and the change in Virga has been remarkable. She is somewhat of a character but is a sweetheart of a glider. Virga likes to be around us. She is the only one of our four gliders who will readily climb on to your arm if you offer it.  When Virga is running around the office or the tent with the others, she is the one who regularly will climb up to your shoulder to make sure you know she is still there. She also enjoys being petted and doesn't mind being picked up. Virga is also more prone to be grooming us, letting us know we are accepted.  M has a bunch of "Virga hickies" on her arm as a result of Virga grooming her when the four of them climb into the sleeve of M's robe in the morning.

Virga absolutely loves her meal worms, and is almost always the first one out when M shakes the container to get their attention.  She is also very persistent when it comes to opening one of the plastic containers we put meal worms in. She will stick with it while the others run off to play. I think they have realized she will get it open eventually and will come and share in the reward when she does finally open it. She seems to have become a little more patient when it's snack time. It can get pretty crazy when four gliders want their meal worms and you are trying to make sure they all get their fair share! Virga does like her food, vegetables in particular. When I place them in their cage after tent/office time each night, Virga is almost always the first and only one to head for the food bowl. The others usually head for their sleeping pouch for a nap first.


Virga has become my favorite of the three females. In the year she has been with us it has been amazing to see how far she has come and become the friendly, and I would even say affectionate, glider she has become. Of the four gliders, she is also the easiest to distinguish physically. We think she is what is called a black beauty, with much darker markings on her face and on her legs. However, it is her personality that really stands out.
Posted by Berg at 10:27 PM No comments: